On March 25, 2021, TomaGold Corporation (TSXV: LOT) (“TomaGold” or the “Corporation”) presented the final results of its 2,502-metre drilling program on its wholly-owned Obalski property, in Chibougamau, Quebec.

Drilling began in December 2020 and ended on February 18, 2021. The program consisted of seven holes, six of which were drilled on two separate sections (450 E and 120 E), while the seventh hole was designed to test the rock type at the eastern property boundary and, as expected, did not return any significant values. The goal of the program was to better define the A-Po zone on sections 450 E and 120 E, located 330 metres apart, with very little exploration work in between. Drilling was also aimed at intersecting the A, C and D zones, some of which had already been mined underground and been the subject of minor surface work.

“These are great results for our first seven holes on Obalski, as they show that the property hosts high gold, silver and copper grades, and appear to confirm the continuity of the A-Po North and South zones, warranting a 10,000-metre follow-up program to start in April,” said David Grondin, President and CEO of TomaGold. “The new program is aimed at defining the A-Po zone by drilling every 50 metres between sections 120 E and 450 E to a vertical depth of at least 500 metres, with some holes reaching a vertical depth of 650 metres. We believe that the results of this first program are a good indicator of the gold potential that lies below. The work is expected to take approximately four months to complete.”

In parallel with the drilling program, samples from certain mineralized zones will be further investigated and re-analysed by Corem using a leaching procedure. In 1987, given highly variable results from its drilling programs, Syngold Exploration, a previous owner, decided to re-run samples using a leaching procedure. Notably, leaching on samples from several intersections, including samples from hole OBS-87-03, returned an average grade of 2.1 g/t Au over 17.1 m, from 331.3 m to 348.4 m (compared to 0.18 g/t Au for the original assays), including a 6.7-m section, from 339.9 m to 346.6 m, that graded 3.43 g/t Au (compared to just 0.254 g/t for the original assay). Assaying (gold, multi-element and whole rock) was performed at three different independent laboratories: Chimitec Ltd., Bourlamaque Assay Laboratories Ltd. and Metriclab (1980) Inc. Cyanidation test work was also done at Lakefield Research. Syngold did not introduce standards or blanks into the assaying chain but carried out diligent re-sampling of the mineralization. The work report (GM-48538) included the assay certificates but did not provide any information on the sample preparation and assaying procedure or the internal control results for the laboratories. The above values have been recalculated from the original assays, taking into consideration re-assaying done by Syngold in 1988.

Finally, a more detailed reinterpretation of the geology, structure and mineralization is also underway. Recent drilling has enabled the Corporation to confirm the presence of two significant gold-bearing structures: the A-Po zone, which is characterized by the presence of a corridor rich in semi-massive to locally massive sulphides, and the D vein, which is defined by a shear that intersects the A-Po zone and is injected by a gold-rich quartz vein locally.

TomaGold has implemented and is adhering to a strict Quality Assurance/Quality Control program for the present drilling program. The core is sawed in half, with one half kept as a witness sample in Chibougamau and the other half shipped directly by bus to ALS Chemex in Val-d’Or, Quebec. The half core is then ground to 1/8″ and split into two halves by ALS. One half is kept as a witness (reject) by ALS in Val-d’Or. ALS pulverizes the other half to minus 150 mesh and takes a 50 g sample for analysis. The rest is kept at ALS and identified as “pulp”. 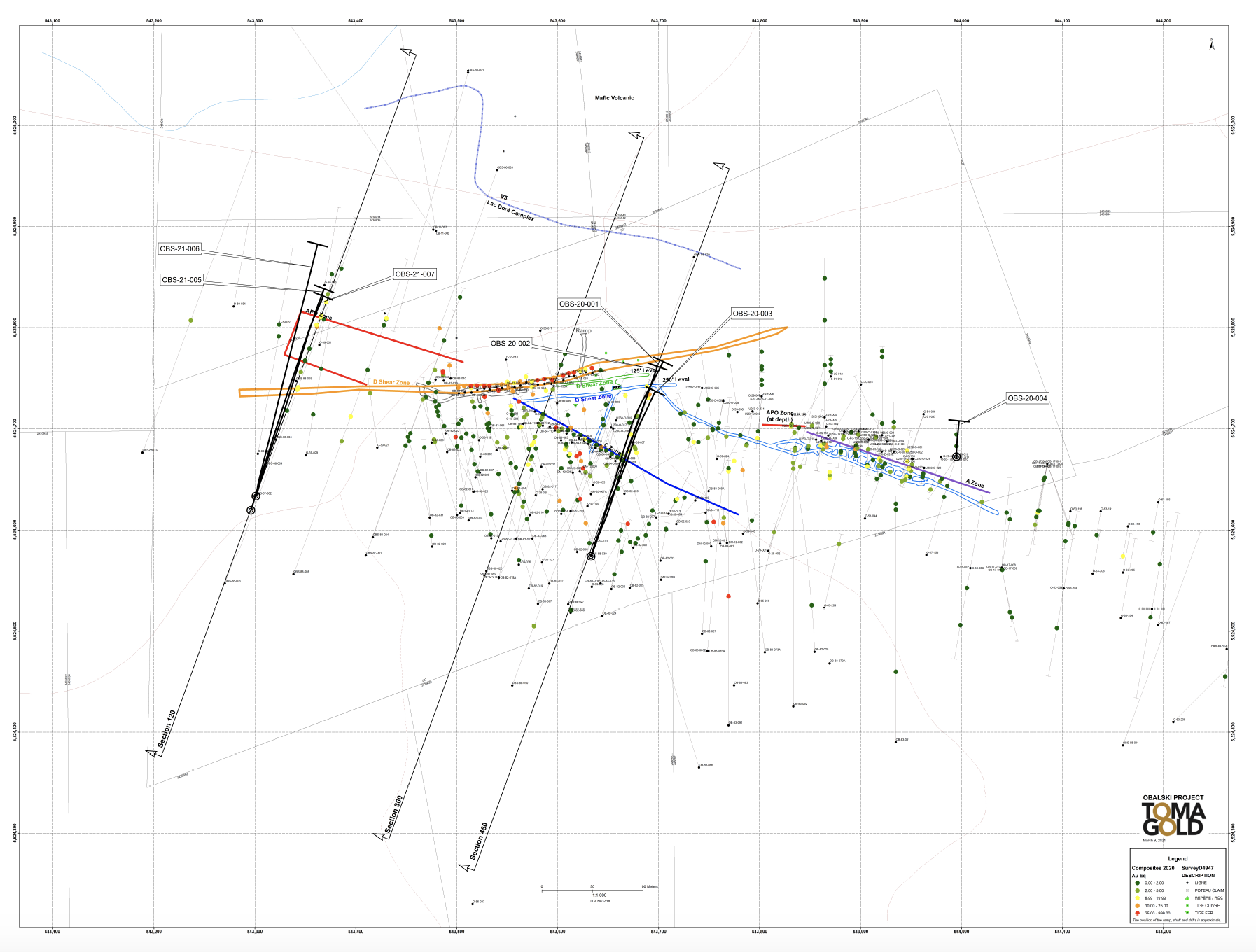 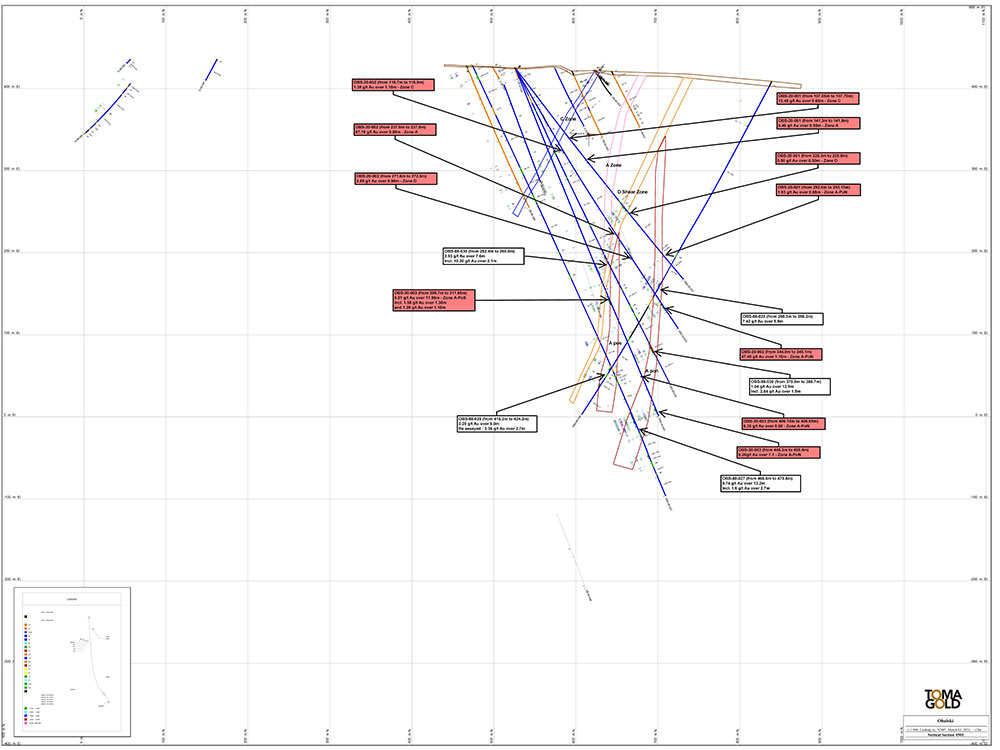 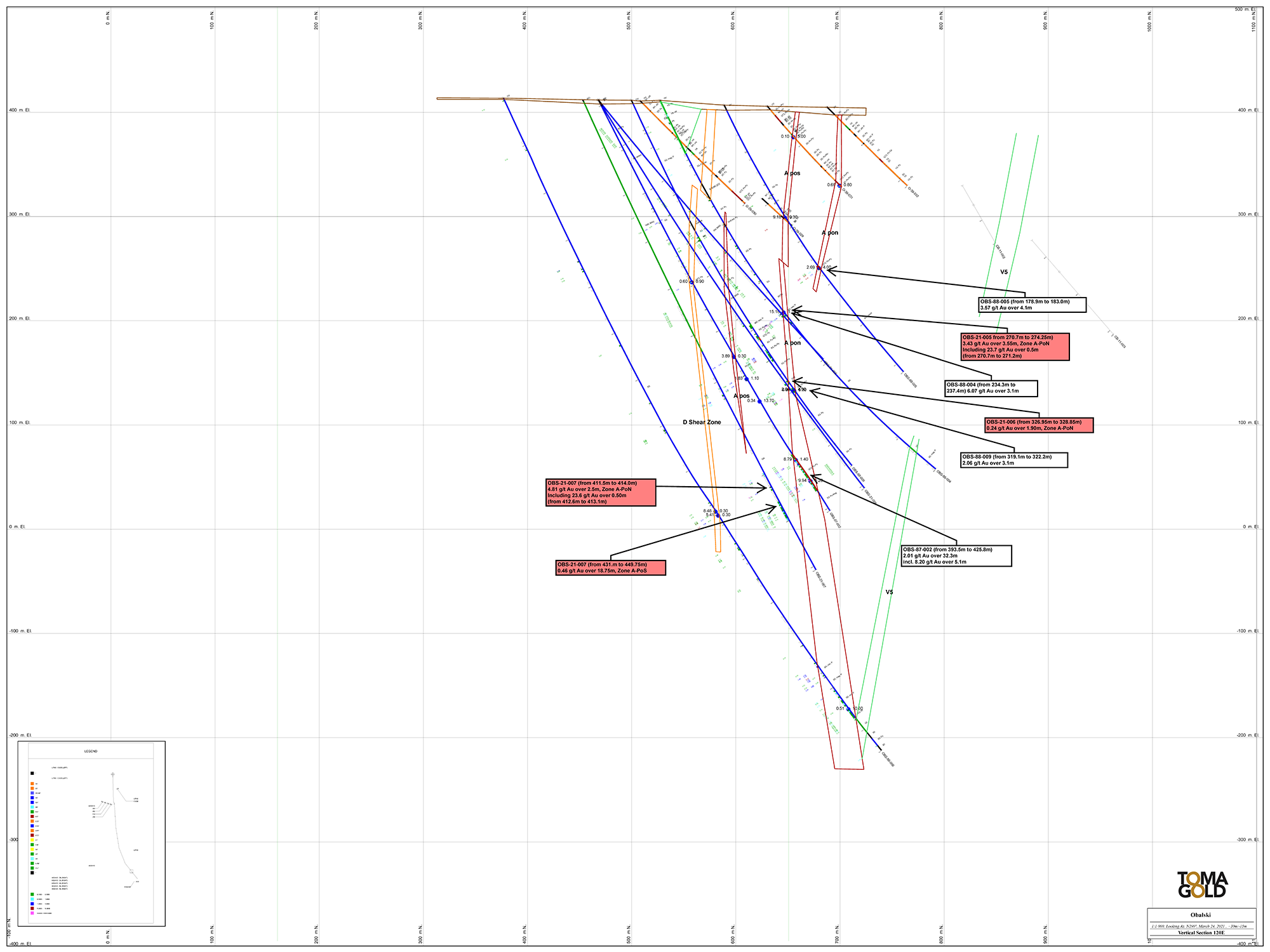