TomaGold is a well-financed gold explorer with extensive ground in five properties at the Chibougamau mining camp in northern Quebec.

TomaGold also has joint venture in the Baird project located in the central Red Lake gold belt in Ontario. The Company has a 24.5% stake with New Gold Inc. holding a 24.5% interest and operator Evolution Mining owning the remaining 51%. Drilling at Baird in the 1980s by United Reef returned such assays as 172 g/t Au over 1.2 metres and 19 g/t Au over 1.8 metres. 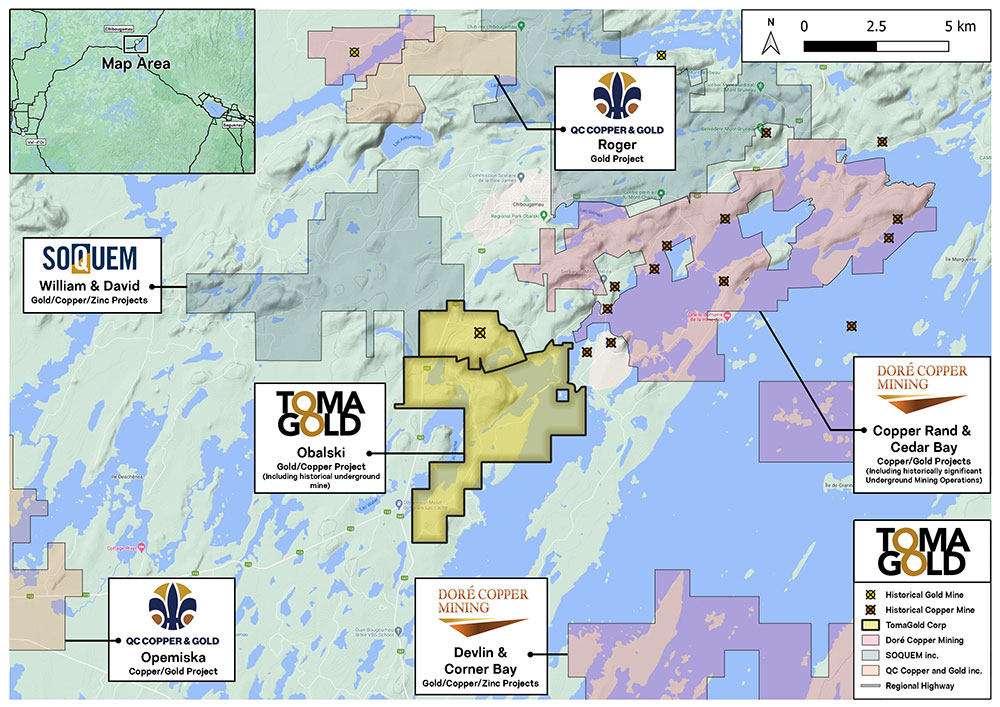 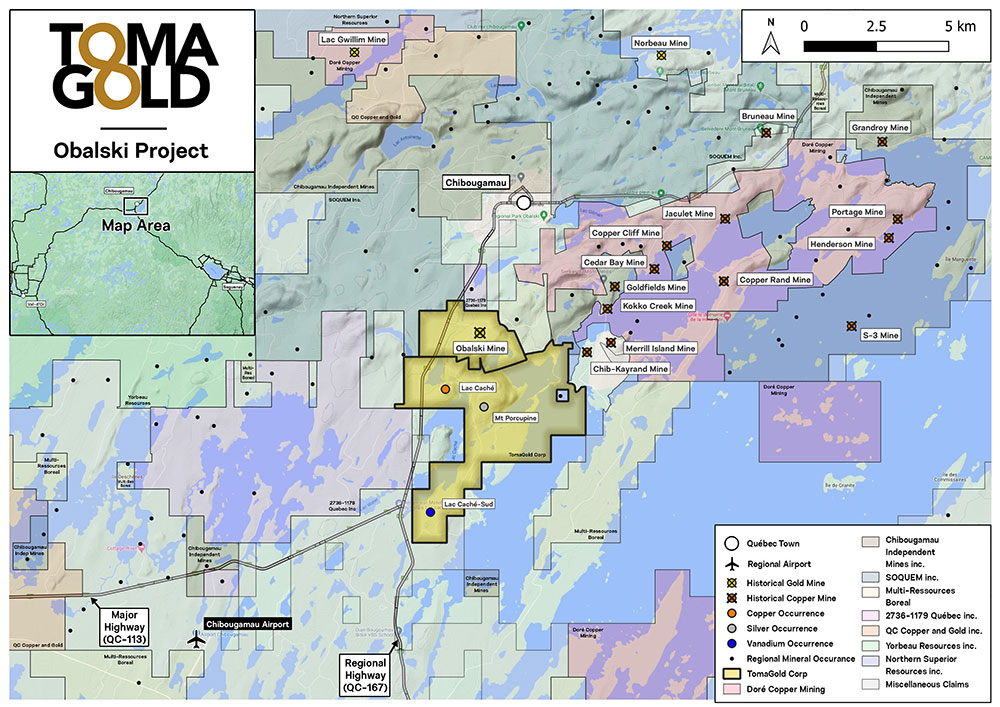 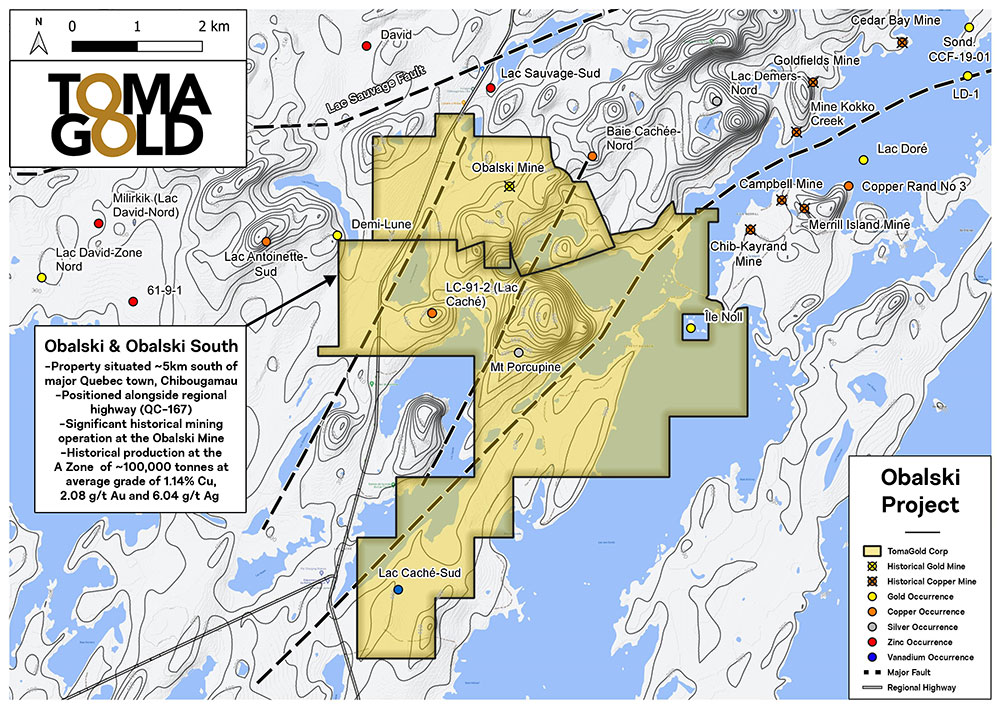 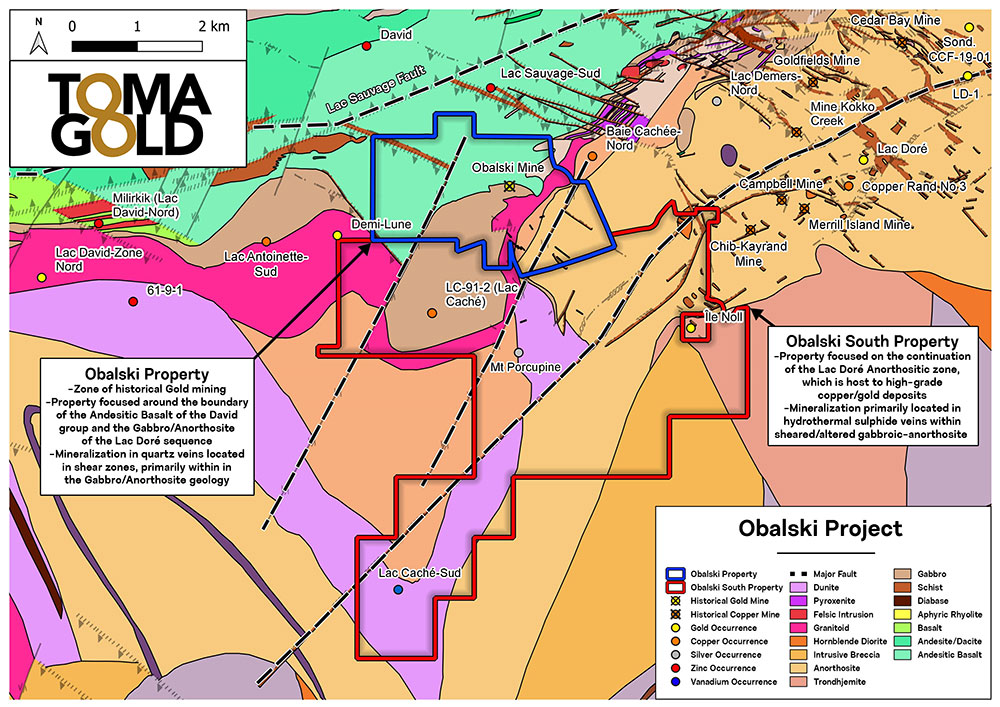 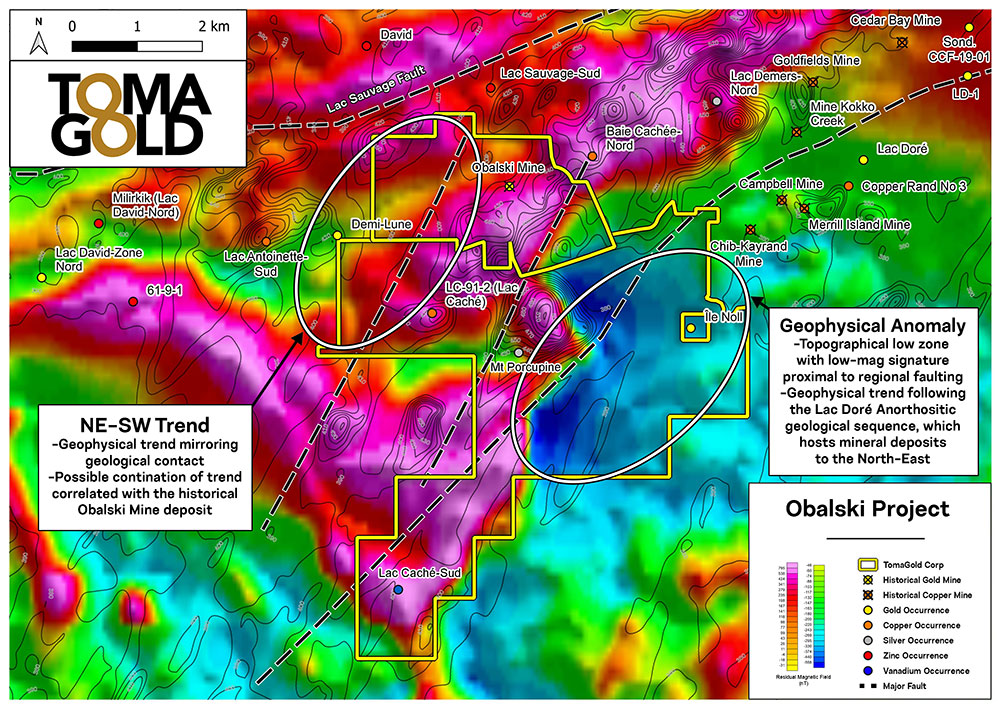 TomaGold owns 100% of the Obalski property, a former gold-copper producer. The property consists of 74 claims and a mining concession covering an area of 2,724 hectares or 27 km2, located approximately 2 km south of Chibougamau, Quebec, in the heart of the Chibougamau mining camp.

The Obalski property hosts seven known mineralized zones, an 85-metre shaft and two ramps. Since the 1930s, more than 500 holes have been drilled on the property, for a total of more than 75,000 metres of drilling, most of which were less than 100 metres deep.

Gold-copper mineralization of economic interest at Obalski occurs as sulphide-rich (up to 60%) quartz-carbonate veins within highly chloritized, carbonated and pyritized shear zones. The mineralization varies from massive to disseminated. The quartz veining is injected within fractures/shears.

Significant surface drilling was done in the early 1980s by Camchib Resources and in the late 1980s by Syngold Exploration. Syngold (which became Thunderwood) systematically assessed the Obalski property from 1987 to 1989, carrying out deeper drilling to probe the potential extensions of the known gold-copper-bearing mineralized structures, namely the A, B, C, D and G zones. Drilling was largely focused on the G zone, at the east end of the mining claim block; nevertheless, the best results were obtained from more limited core drilling in the area of the shaft and the decline. The 16 holes in this central area led to the discovery of a new structure to the west of the shaft, called the A-Po zone. Syngold traced the new structure, which was characterized by a thick sulphide envelope, over a strike length of more than 450 metres. The best results obtained for the A-Po zone were:

* The original drill hole number has been modified to include the year it was drilled to avoid confusion.
** The true widths of the intersections are estimated at 60% of core length for the deeper holes and 80% for the shorter holes.
*** Indicates the new metric reference for the sections; 000 m corresponds to the original 32+00W (feet).

Assaying (gold, multi-element and whole rock) was performed at three different independent laboratories: Chimitec Ltd., Bourlamaque Assay Laboratories Ltd. and Metriclab (1980) Inc. Cyanidation test work was also done at Lakefield Research. Syngold did not introduce standards or blanks into the assaying chain but carried out diligent re-sampling of the mineralization. The work report (GM-48538) included the assay certificates but did not provide any information on the sample preparation and assaying procedure or the internal control results for the laboratories. The above values have been recalculated from the original assays, taking into consideration re-assaying done by Syngold in 1988.

From 2012 to 2015, David Malouf carried out very limited diamond drilling and stripping and channel sampling on the C zone. Significant results of economic interest were intersected by both the drilling and the channel sampling, which were aimed at testing previously reported gold values. The trench has since been filled in; the drill results were as follows:

* The true width of the structure is about 71% of the core length.

These values are considered as historical only and are solely used for exploration planning purposes.

On April 14, 2022, the Company reported the latest results from its 11,500-metre drilling program on the Obalski property, a summary of which is provided in the following table:

TomaGold has implemented and is adhering to a strict Quality Assurance/Quality Control program for the current drilling program. The core is sawed in half, with one half kept as a witness sample in Chibougamau and the other half shipped directly by bus to ALS Chemex in Val-d’Or, Quebec. ALS grinds the half core to 1/8", split it into two halves and keeps one half as a witness (reject) in Val-d’Or. ALS pulverizes the other half to minus 150 mesh, takes a 50 g sample for analysis and keeps the rest, identified as “pulp”. 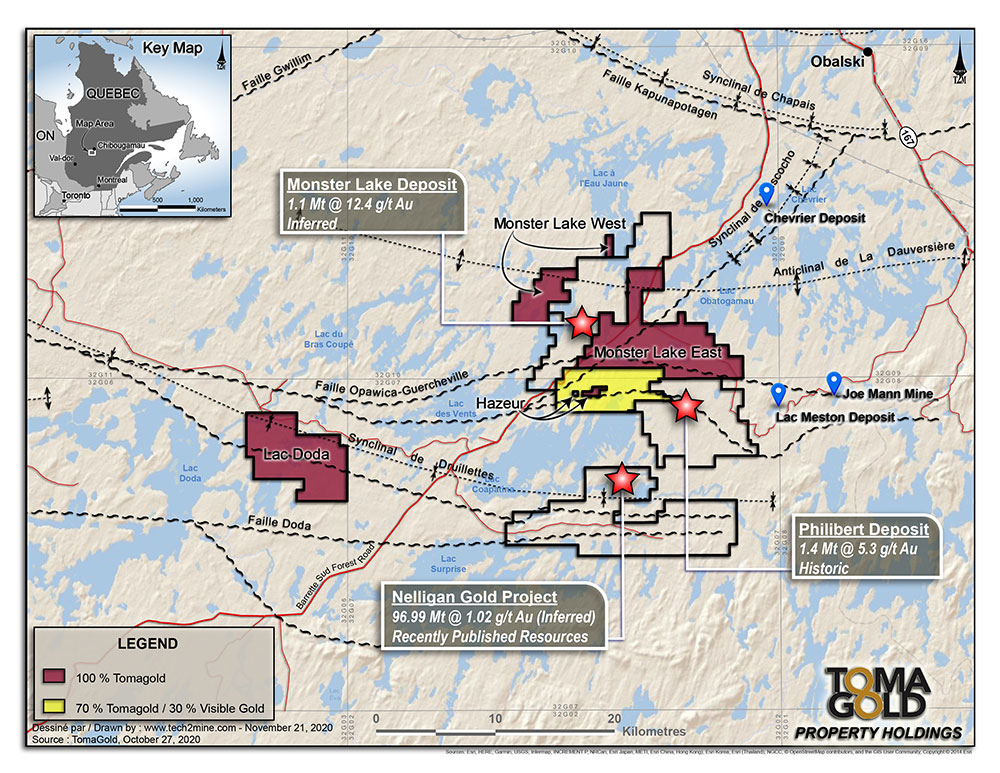 TomaGold owns a 100% interest in the Monster Lake East property, which consists of 69 mineral claims covering an area of 4,269 hectares. The property is located directly to the east of the Monster Lake property and is divided into three sectors: Cookie Monster, Little Monster and Monster Island.

In November 2015, the Company initiated a high-definition magnetic VTEM-type airborne survey over the Monster Lake East and Hazeur properties. The survey revealed strong electromagnetic anomalies, including some that had already been identified by IAMGOLD on the Monster Lake property and which extend onto TomaGold's properties.

In December 2015, TomaGold carried out an initial drilling program consisting of 11 holes totalling 1,783 metres. The goal of the program was to test some of the anomalies identified on the Monster Lake East property. The program showed that these anomalies are related to the presence of disseminated pyrite at the edge of pillow basalts, with some showing a strongly magnetic rock of gabbroic composition. The program returned gold assay results of below 1 g/t gold.

In February 2018, TomaGold carried out a partial airborne survey over a large copper geochemical anomaly that was discovered by a government survey. It also began cutting a grid of 20 km of lines, including a 4 km baseline, and retained Abitibi Geophysics to conduct a detailed IP survey to explore the anomaly to a depth of 300 m.

Furthermore, a detailed compilation has begun on the Monster Lake East / Hazeur properties to correlate all the detailed airborne and ground geophysical survey data with recent stratigraphic and structural interpretations. Detailed information from recent drilling by TomaGold will also be incorporated to the interpretation, which will generate drilling recommendations.

Property description
TomaGold owns a 100% interest in the Monster Lake West property, which consists of 21 mineral claims covering an area of 1,172.51 hectares. The property is located directly to the west of the Monster Lake property.

In November 2015, the Company initiated a high-definition magnetic VTEM-type airborne survey over the Monster Lake East and Hazeur properties. The survey revealed strong electromagnetic anomalies, including some that had already been identified by IAMGOLD on the Monster Lake property and which extend onto TomaGold's properties.

In February 2018, a detailed compilation has begun on the Monster Lake East / Hazeur properties to correlate all the detailed airborne and ground geophysical survey data with recent stratigraphic and structural interpretations. Detailed information from recent drilling by TomaGold will also be incorporated to the interpretation, which will generate drilling recommendations.

TomaGold owns a 100% interest in the Monster Lac Doda, which consists of 80 mineral claims covering an area of 4,478 hectares. The property is located approximately 20 km southwest of the Monster Lake property. On July 9, 2020, the Corporation announced the signing of an option agreement for the sale of up to an 80% interest in the Lac Doda Property to Goliath Resources Limited (TSXV: GOT).

In the summer of 2002, Skyharbour completed a 1,600-metre drill program with gold intersections of up to 10 g/t gold over 1.0 metre encountered in what is known as the North Shear Zone. The 2002 drill program also identified a potential South Shear Zone (Source: Baird Property 2003 Drilling Program, David J. Busch, P.Geo., March 3, 2004).