Montreal, Quebec, September 21, 2022 ‒ TOMAGOLD CORPORATION (TSXV: LOT) (OTCQB: TOGOF) (“TomaGold” or the “Corporation”) is pleased to announce the acquisition of a 100% interest in 38 claims from Noranda Royalties and the acquisition of 69 map-designated claims covering a total area of 5,487.52 ha (or 55 km2). These claims are located near Zones 1, 2, 3 and 6 of the James Bay Lithium Brisk project optioned by Monger Gold and along and south of the Trans-Taiga regional road and power line infrastructure, approximately 5 km from the LG-3 airport. These claims are also located on the same geological corridor as the Cancet (5.6% Li2O over 36.5 m) and Corvette (1.65% Li2O over 159.7 m) projects, held by Winsome Resources and Patriot Battery Metals respectively, further east. 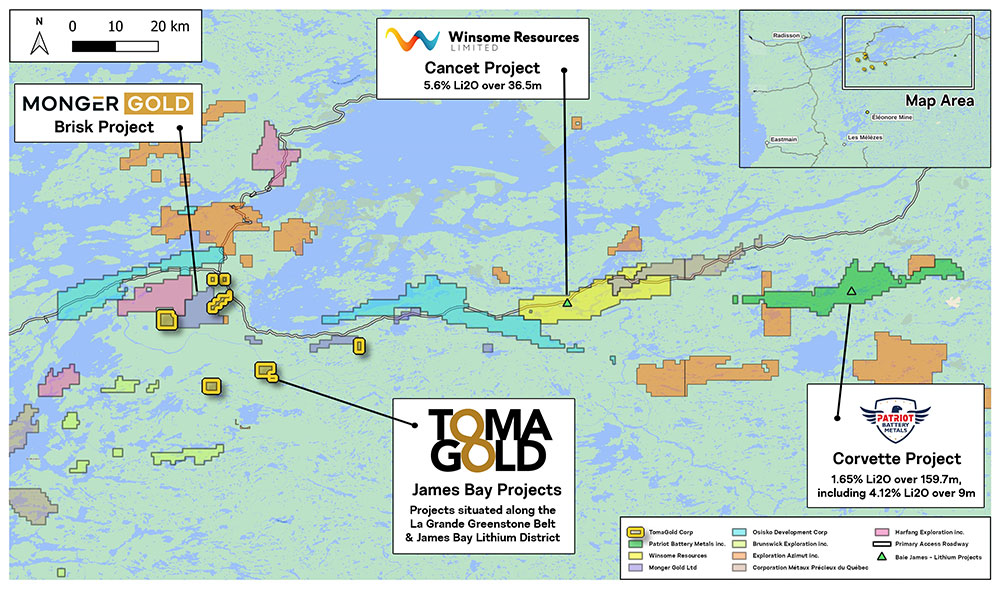 The project was identified for its prospective nature of lithium mineralization in pegmatite dykes during the compilation of geological data by Noranda Royalties. The project hosts several known pegmatite dyke outcrops. Historically, there has been no lithium exploration activity on the project, with the exception of a historical spodumene-bearing pegmatite showing that was identified by the Quebec Ministry of Energy and Natural Resources on June 17, 2015. In addition to the acquisition of the project from Noranda Royalties, the Corporation has also increased the size of its lithium property with the addition of map-designated claims, allowing it to be even better positioned in an area where exploration activity has been sustained for several months. The Corporation will soon begin a sampling and prospecting program on its entire property.

The acquisition terms for the Noranda Royalties claims are the following:

The transaction with Noranda Royalties is subject to regulatory approval.

The 2,947-metre drilling program on Obalski has been completed and all samples have been sent to the ALS Global laboratory for analysis. A total of six holes were drilled in the new zone to the south that was identified by the 3D induced polarization (IP) survey conducted this winter. The Corporation will soon carry out new IP geophysical surveys in these last six holes and in old holes deemed relevant in the same area.

TomaGold Corporation (TSXV: LOT) (OTCQB: TOGOF) is a Canadian mineral exploration company engaged in the acquisition, assessment, exploration and development of gold, lithium and rare earth element projects. TomaGold holds interests in five gold properties near the Chibougamau mining camp in northern Quebec: Obalski, Monster Lake East, Monster Lake West, Hazeur and Doda Lake, as well as a 24.5% interest through a joint venture with Evolution Mining Ltd. and New Gold Inc. in the Baird property, located near the Red Lake mining camp in Ontario. In addition, it has a 100% interest in a lithium property in the James Bay region of Quebec.